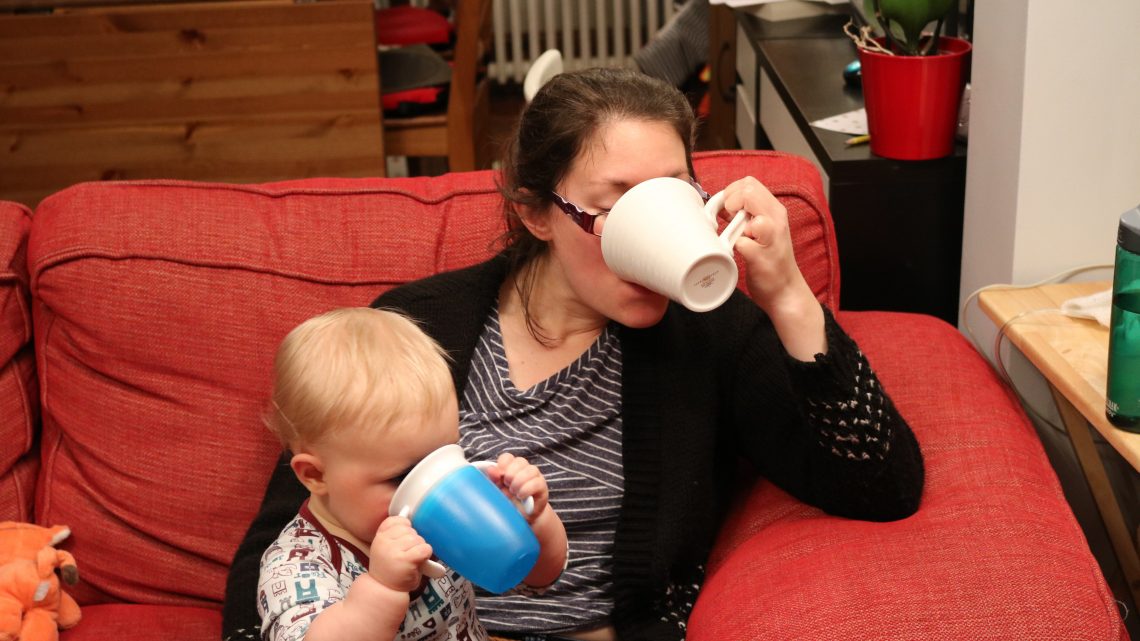 It was a cold and blustery November evening. The moon shone brightly over Westminster Bridge, its reflection broken by the roughness of the water. A man looked out over the river, a cigarette smouldering away between his fingers, casting a perfect black silhouette against the lights of the Houses of Parliament.

Welcome to the worst Sherlock Holmes detective story ever. Arthur Conan Doyle, my apologies – quite literally – in writing.

Sherlock Holmes, ably assisted by Dr Watson, star in ‘The Hunt for the Alternative Milk Allergen‘ (Guy Richie, just give me a call to get the script rights).

Unknown to the rest of the world, Moriarty, back from the dead, has taken up residence in a packaging factory in Milton Keynes. His devious plan: to in some way contaminate ‘dairy-free’ milk cartons with an, as yet unknown allergen that will cause a reaction to Piglet. Will Piglet have an allergic reaction, will his family be driven mad by the uncertainty or will Sherlock unravel the mystery in time to save the world…? 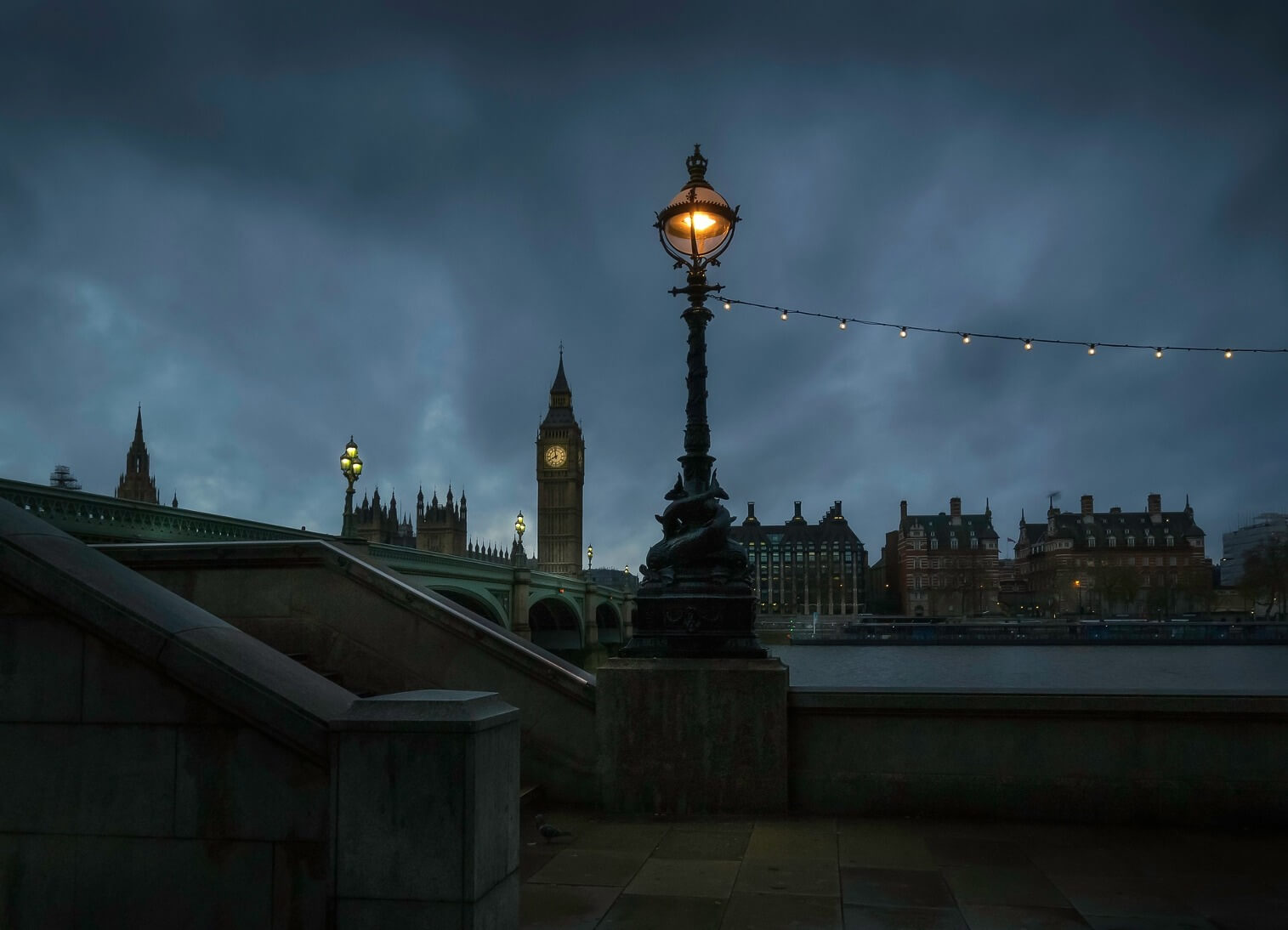 I’m stumped by some of the reactions that Piglet seems to have to some alternative milks. Milks where, as far as we know, he isn’t allergic to any of the named ingredients but seems to display some level of reaction whenever we introduce them. I covered this a bit in the “The Oat Milk Test” but we’ve had it brought back to his attention recently on trying yet another milk. This time Rebel Kitchen’s “Mylk”. 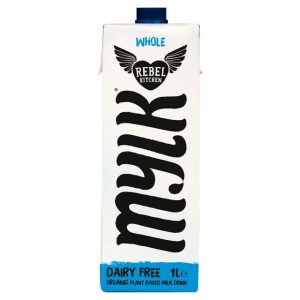 Rebel Kitchen’s Mylk – changing the spelling but not the pronunciation sounds like a comedy of errors waiting to happen. Luckily I trade in the written form.

We’d not tried it before (I think it might be fairly new?) but it caught my wife’s eye as a dairy-free milk that might be more like the real milk she occasionally has nostalgic pangs for. My wife likes the Cashew Nut milk that we have every day and will happily have a hot drink with that or Almond Milk (more commonly available when out) but for things like cereal those are still a bit of a leap of faith from cow’s milk. For context (and beautiful, possibly not coincidental, irony), my wife craved milk products throughout being pregnant with Piglet: hot milk this, chocolate that, cheese this, yoghurt that, you get the idea…!

Before anyone suggests it – it’s worth explaining that lactose-free cow’s milk isn’t an option for us. For people who are lactose intolerant, this is a great way of making milk available to people who would otherwise have problems digesting the sugars in it. But for someone who is CMPA (Cow’s Milk Protein Allergic) – it’s the protein in the milk that causes the allergic reaction, not the lactose. As an aside, it’s actually more rare for a weaning baby to be lactose intolerant. I say more rare; one of the babies in our NCT group had it, so that’s one in my massively unscientific population sample of 8. Lactose is in all animal milks, including human breast milk, so being lactose intolerant as a baby is a pretty big issue.

Unlike some of the other alternative milks – Mylk is a hybrid of several plant ingredients, designed to make a more realistic alternative to cow’s milk. It even comes in whole fat, semi-skimmed and skimmed. The company that make it, Rebel Kitchen, are a coconut milk and yoghurt manufacturer and have made Mylk by incorporating other ingredients to make a more authentic ‘milk’ taste. According to their website and the packaging it is:

Having never really drunk cow’s milk myself (either when allergic as a child, or disinterested in my ‘between allergy years’), I can see how it’s more like the original thing but it doesn’t hugely appeal to me. It’s a bit like Linda McCartney sausages as a vegetarian – I don’t really get why you’d want to eat something that seems so ‘meaty’. I suppose it depends on the reason you’ve given the real thing up in the first place. While not necessarily ideal, I prefer the sweeter and milder taste of nut milks. My wife didn’t get to try it unfortunately as it’s too many loaded barrels of Russian Roulette to give it to both my wife and Piglet at the same time, should he have a reaction.

Piglet drank it and would ask for it but actually didn’t seem that keen on it whenever we gave him a glass. He’d drink enough to quench his thirst but not enough to belch and put the glass upside down on top of his head. 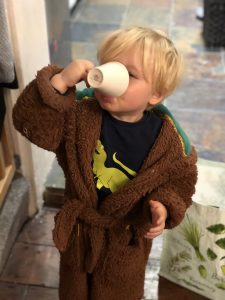 The reactions were subtle and with so many of the more mild reactions he’s had – difficult to pin down to the source. In isolation I probably wouldn’t have thought anything of it (and therefore from a control group point of view that probably throws any correlations I’m proposing out of the water in terms of statistical significance). However, we were looking out for potential reactions following seeing problems from Oat milk and Coconut milk previously. Interestingly Mylk is coconut cream (along with other ingredients), something he eats regularly in our cooking – so yet another difficult to explain reaction.

The first I noticed was a rash on his face. Not a particularly bad one – and I had just wiped his face – but the redness persisted for up to an hour after I noticed it. This happened when I took him up to do his teeth and get dressed after breakfast (where he’d had the milk in a glass along side his toast and Marmite – very much a creature of habit!). The other reactions were even less specific. He has slept badly for the last few nights, having previously slept through pretty much the whole night for a few days. Naturally this could be anything but he was cranky when going down to sleep as well… Lastly, his tummy seemed upset. Not really bad, no spectacular disasters or anything but he seemed keen to sit on the toilet but unable to do anything and then clearly slightly in pain while passing. He was more smelly than usual with it as well…

It’s funny (or not) but writing all these symptoms down together – it makes it sound much more clear that there was an allergic reaction than I think me or my wife really have been. As always, there are other factors that add to the confusion: he’s been a bit poorly in the previous week and we’ve just changed his bed so that’s quite a change in circumstance as well. I’m by no means sure that he is allergic to something in Mylk, but at the moment (without any pressing need) I won’t be rushing to get him to try again. It just means my wife will have to settle with nut milks for a little bit longer.

I would love to know what it is that Piglet is reacting to in all of these. Able to eat porridge but allergic to oat milk, able to eat coconut milk in a curry but allergic to coconut milk in a carton and able to eat a range of coconut cream puddings and yoghurt but allergic to coconut cream milk in a carton. The carton seems to be the only common denominator here! We had looked at preservatives – in fact even the dietitian we first saw tried to find a commonality between oat and coconut milk. But there doesn’t seem to be anything that’s in those but not in Cashew Nut Milk (or almond, or hemp etc…). And to further complicated it, Mylk doesn’t have anything added to it at all!

If anyone does know what it might be – I’m very keen to understand it better…!