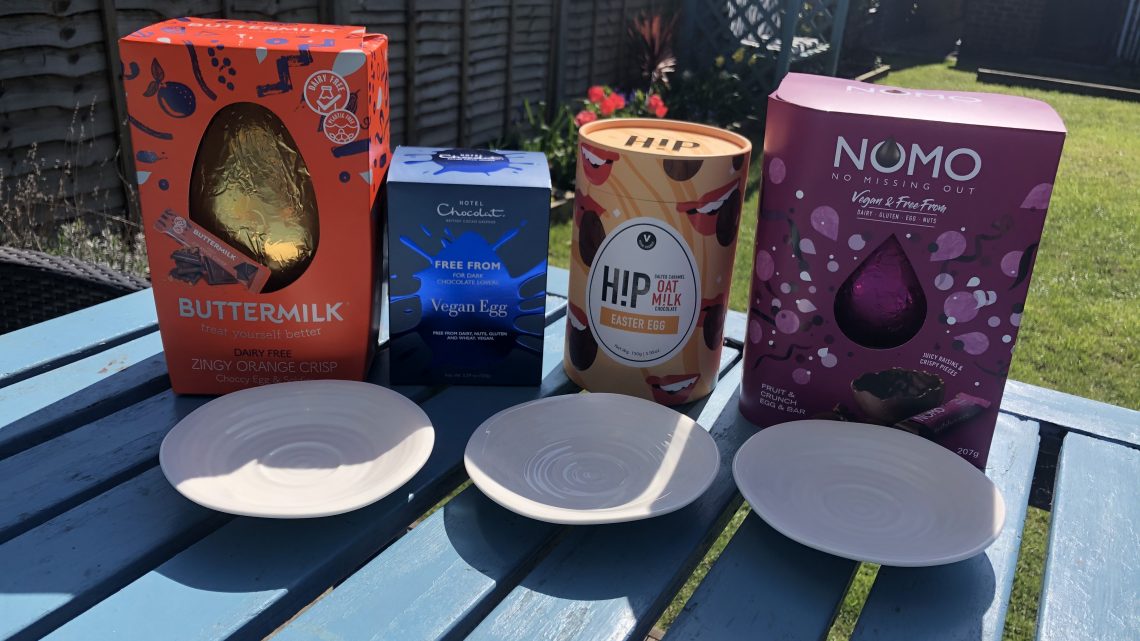 I do realise that this is all in the wrong order in the sense that it’s now too late for you to stock up on Easter eggs for this year but I still think it’s worth letting you know what we thought of them in general, in terms of ‘free from’ chocolate. As discussed in the last blog, we stocked up on 4 vegan Easter Eggs and we made sure to make good notes as we devoured our way through them on Easter Sunday!

I won’t spend ages describing them in detail; I don’t have the vocabulary to describe chocolate in 4 different ways so I’ll stick to what I do best: numbers! We ranked the eggs against 5 categories and used that to come up with a score. Both my wife and I kept score separately and our views were notably different in some cases so it shows its personal taste as much as anything but the scores are still interesting and useful.

It’s also worth pointing out that all 4 eggs were ‘good’ Easter eggs. Gone are the days of ‘free from’ chocolate having to mean chemically tasting nasty chocolate just to be part of the festivities! All four have been slowly (or in some cases not-so-slowly) eaten down over the week which is the ultimate test really…

Naturally these are quite subjective and I can’t claim to be any chocolate connoisseur. But we felt this covered the main areas of appeal of an Easter egg. Also Piglet was consulted throughout but found the scoring system archaic and in bad taste (from what I could tell).

From my side, the H!P egg had a weird smell from the packaging and the Hotel Chocolat had the best ‘chocolate hit’.

The Hotel Chocolat chocolate blew the others out the park here.

Quite big differences between us here: my wife wasn’t a huge fan of the salted caramel of the H!P, but we both agreed that the dark chocolate of the Hotel Chocolat was dark enough for just a small amount to be enough.

We really liked the thickness and texture of the NOMO egg, the splat egg pattern on the Hotel Chocolat egg and the rippled pattern and box of the H!P; the Buttermilk looked a bit plain in comparison (although the box is very colourful)

We both agreed that the NOMO egg is very tasty with an entire egg of the crispy, raisin chocolate from the bar. My wife didn’t really like the H!P flavour (we’d both quite like to try other flavours of the chocolate because the oat milk did make it the ‘milkiest’ chocolate but the salted caramel is very salty).

We were both a bit surprised that the NOMO didn’t come out top for both of us with the Hotel Chocolat scoring really well in the first two categories and actually edging it in my wife’s total score. That said, I think we both agreed that if we were only going to buy one of the eggs again it would be the NOMO. If nothing else you get about 33% more chocolate for 2/3 of the price!

I was really impressed with them all though and I’d certainly try more of the H!P and Hotel Chocolat options in future. For the sake of pure balance though; it was the Buttermilk that won in Piglet’s eyes. So perhaps that’s all that matters?