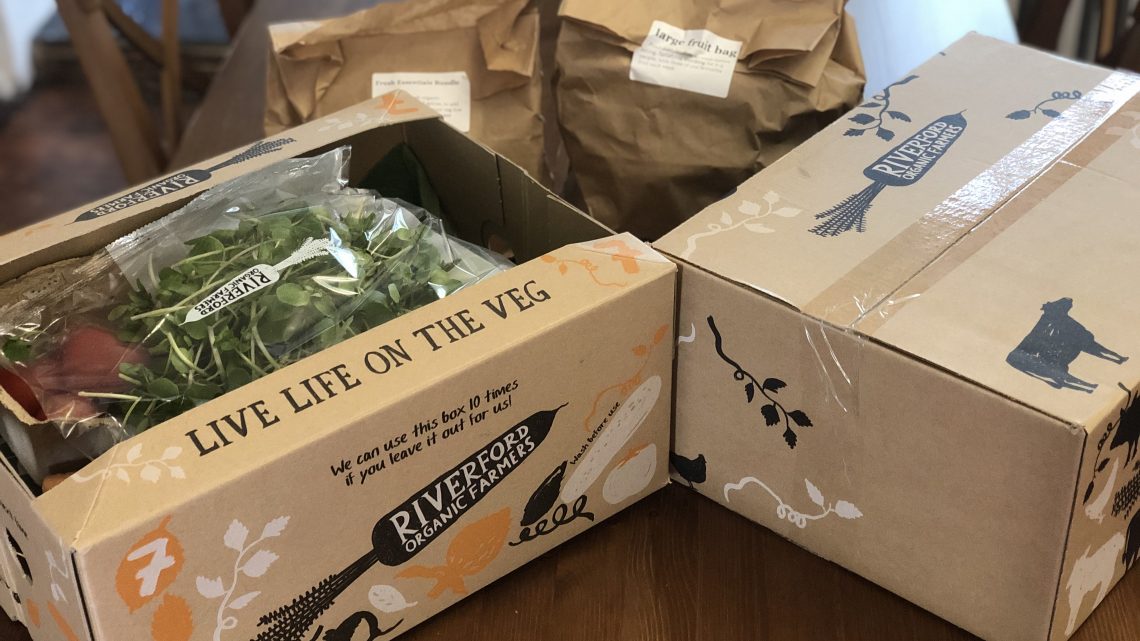 I can’t really believe we’ve never done this before, considering the amount we cook from scratch and the reliance on fresh fruit and vegetables for our various diet requirements. However, the lockdown conditions have forced us to reconsider our food delivery options and when a delivery slot became available through a well reviewed local company it seemed like a no-brainer.

We chose Riverford Organic Farmers; simply as a combination of having slots available and having good reviews. We’d put ourselves on a waiting list after a few weeks of struggling through weekly supermarket shops and missing our previous reliance on internet deliveries (that have understandably started being prioritised for those in greater need than us). We were pleasantly surprised when they emailed back within a few weeks to tell us that we could now book a weekly slot if we wanted it.

We dipped our toes in lightly at first, just going for a medium sized veg box. I’ve always had a slight concern that we’ll never get enough of the things we’d want, and end up overrun with vegetables we wouldn’t choose to eat. However, with the current lock down and with us cooking so much from scratch from home; we’ve found that we simply can’t buy enough vegetables and so it seemed unlikely we’d be putting much to waste. We were all quite excited when the first box arrived and one aspect I hadn’t anticipated was building Piglet’s excitement into finding out what vegetables were arriving. He’s already tried at least two vegetables that he would never normally have eaten before!

It’s funny, I say ‘excitement’ because there was definitely an unboxing anticipation but actually they’re quite clear about what you’re going to get each week and so it was really more to see what it looked like and how appetising it would look. I completely understand why, but one minor issue for us is that you can’t substitute ingredients; you can however chop and change between types of veg boxes if that suits you better. Obviously in some areas being able to choose our ingredients is critically important but in veg it’s not such a major issue. The only thing we’ve tried to avoid is potatoes because they don’t really fit with my wife’s low sugar/starch PCOS diet. We used the ones in the first order quite easily as sides for Piglet or myself when my wife was having something else, but opted for a different box on the second week when it was clear we’d be getting more.

The veg that we got looked fantastic and more plentiful than I had predicted considering the price. A huge bunch of heritage carrots, a handful of onions, a big bag of new potatoes, a cardboard tub of mushrooms, a pointed red pepper, two large courgettes and a big head of chard (this paragraph is really stretching my knowledge of collective nouns). Everything was beautifully fresh and well packaged. We’d found a purpose for every single item well within a week. There were even some recipe tips for some of the less obvious veg (like chard) which worked out really well. Granted some things Piglet liked and some things he didn’t. But he desire to try all the different things was really delightful to see.

For our next weekly order, we decided to up the stakes a bit going for a fruit bag, a different veg box, a bag of aromatics called essentials and even a few pieces of their organic meat. I’m not exaggerating when I say that Piglet wanted to open the front door at 7:30 in the morning on the day of the delivery to see if it had arrived yet; he was that excited… We were upstairs when we saw the van pull up and Piglet was shouting at the delivery driver with excitement to accept receipt of the boxes. The fruit was great, even if it didn’t match our extraordinary requirement for bananas every week! The essentials bag had ginger, chillies, garlic, lemons, rosemary and coriander; most of which had been eaten after about 3 days! The veg box was slightly different from the previous week and gave us aubergine and watercress which we’ve quickly found uses for. The meat was a bit different: we didn’t particularly fancy any of the pre-chosen meat boxes that they offer so we chose a couple of specific options which they also cater for. A big problem with the boxes is that neither my wife or I like lamb and they had relatively limited other options (I assume as a result of the unusual high demand at the moment). We chose a pack of beef burgers and a couple of packs of casserole stewing beef. Where the veg boxes seem good value compared to what we would otherwise buy from Sainsbury’s; the meat is notably more expensive – I think just because its higher quality organic produce and therefore not directly comparable. As much as I think we spend too much money on food overall; I do think that it’s worth buying quality meat if you’re going to do it at all. I would probably choose to buy better quality meat and eat less of it, if I could find a way to make that work practically with our diet requirements.

We’re looking to firm up our third weekly order now. We’re planning to get more veg as we’ve already found we’ve eaten through much of the week by the weekend (it arrives on Thursday). We don’t think we’ll need an essentials bag every week but we’re curious to see what else we’d get this week. The fruit bag is a complete no-brainer as we easily eat that and need to top up with a few other bits. The meat is still pretty thin for options because I think everybody is probably doing what we’re doing: going for a veg box and then extending into the rest of their service when home-deliveries are so valuable. We’ll try a chicken this week from which we make lunches and stock so it’ll go a long way even if still a bit expensive.

My only slight surprise is that we’ve started to prep our next supermarket shop and, despite spending roughly £50 through Riverford, it looks like there’s still a lot of stuff we need to buy. It’ll be interesting to see how it works out over time. It’s been an eye-opener to realise how much we need to spend on food just to feed the three of us when there’s no nursery lunches or eating out or anything else to break up the 3+ meals a day.

Overall, I’ve been really impressed with the Riverford deliveries and we’ll definitely keep them going. We’ve managed to put all of the various veg to good use so far with nothing going to waste but I’ll be interested to see how well we do when life goes back to normal. When you’re cooking meals on the fly twice a day it’s quite easy to be flexible and work in variations but I wonder how much we’ll be able to make use of it once Piglet’s back to nursery (or, crikey, school) and we’re back to packed lunches and resorting to more meals from the freezer. The one negative for me so far has been the meat. I think this might be just personal preference and so I probably shouldn’t hold it against the review overall but I was looking forward to trying the high quality beef burgers, especially as they probably cost about 50% more than we usually spend. However we had them this evening and they were very gamey with a strong taste of the ageing process and distinctive beef fat taste. It reminded me of the strong taste of lamb and I couldn’t actually eat mine. It’s not the first time I’ve had a burger that’s tasted like that and in general it’s been from higher-end establishments that I’ve had that experience so some people might think I’m a philistine! But it’s not for me and I wouldn’t order them again. We’re using the beef chunk for a chilli tomorrow and I’ll be interested to see if I have the same reaction to that as well. I’d be interested to know if any of you have the same experience – particularly if it’s a result of being a child vegetarian. I think with lamb, I’ve just never learnt to accept the animal fat flavour. I’ve read some very good reviews of the organic chicken though so I suspect I won’t have the same reaction next week.

In other news it looks like we might be starting to make a gradual transition to a vague memory of normality with schools and pre-school making steps towards returning (although I suspect that sentence will be out of date by the time I publish this blog). Obviously that changes things quite drastically in this house (teacher and preschooler). I’m excited to get some of our freedoms back but also slightly hesitant at giving up some of the quality time I get with Piglet out of this. I’m also nervous about rushing him back to nursery before it seems completely safe, but unsure how much I get to make that call. I certainly can’t work anything like the levels I should be doing until he’s back in some sort of childcare but there are more important things, both personally but also from a wider social responsibility, than rushing back to work. I suspect Piglet will go back to nursery for some time before he finishes for good over the Summer holidays; I’m just not sure it will on the 1st June.

As you’ll have seen if you follow my instagram account, Piglet has very much taken to cycling recently. He’s progress is astronomical what with moving from cycling the length of a pavement last week to managing over 8km with us today. He’s a natural and the joy he gets from it makes me thing it’ll be something that lasts him a long time. To be fair, I think that comes from both his dad and his grandfather who both have a small part of their soul permanently hung on a pair of handlebars. His pace is a challenge too – he’s already so fast that running with him (particularly because it’s quite stop/start) is like doing interval training but it feels slow when cycling with him for long distances. He’s absolutely chomping at the bit to go to our nearest mountain bike trail centre (Swinley Forest) and try out the Green route when “we can go out lots and lots’ (i.e. lockdown is over). I’m desperately trying to explain why maybe he’s not quite ready for the 13km high-difficulty red-route just yet!

I hope you’re all keeping well and coping with whatever challenges the current situation is throwing at you. I’ve been made increasingly aware of how mental health is challenged in situations like this and I’m well aware that my exercise is a large factor in keeping me sane at the moment. Don’t forget to talk to someone, anyone, if you’re finding things tough. You won’t believe how much a small comment can change things or just open up support you might never knew was there. I honestly think that most people want to help in these situations, it just isn’t always obvious how.

I leave it there for now. Take care!