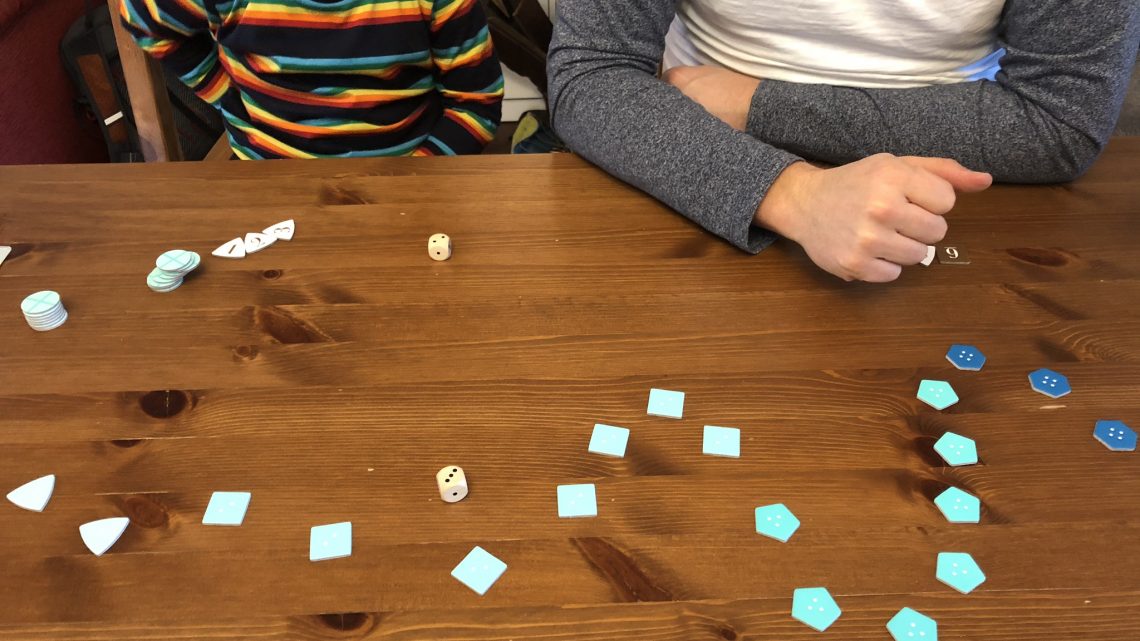 I am absolutely loving playing board games with Piglet now that the clocks are going back and our daylight is shrinking. We’ve played things like Ludo and Snakes and Ladders for a while but he used to struggle to stay with the game and, while keen to start, would often get distracted. Since he’s started school though he seems to have taken a much greater interest in high concentration activities. He seems to really enjoy his school homework and is quite willing to focus for a much longer time than he used to.

As such we’ve been able to introduce some more complicated games and I’ve been astonished by how much he’s enjoying them. It’s currently half term and when we can’t get out and about, hours are spent just playing one game and then another back to back. It’s not just him that enjoys them – he’s competitive enough to make the game playing entertaining and I really enjoy doing something with him where there is genuine development over a period of time. Some of his simpler games are pretty short and rely just on luck (or occasionally luck and a bit of memory) so it can be hard to keep it interesting for adults.

The one that has taken me most by surprise is Carcassonne. If you’ve never seen it before, Carcassonne is a tile-based German-style board game for 2+ players and involves placing tiles at random and trying build cities, roads, cloisters and farms with greater points for larger structures. It’s a fairly quick game in that there are 72 tiles and only takes ~45 mins to play so you’re getting a go every few minutes. The rules are relatively simple but quite strategic and you need a fair bit of spacial awareness to understand your options each round. You can play it quite agressively competitively; trying to steal others cities and hamper their progress but actually it’s quite a pleasant game if you just try to maximise your own options without worrying about what others are doing. In fact, once it’s clear who’s likely to win you can actually start helping others out to make it more equal. I’m amazed at how quickly Piglet has taken to it. He can instantly tell where each piece can go and completely understands the scoring and overall strategy. I would thoroughly recommend it to anyone looking for family entertainment in the longer evenings.

The other game we’ve played a lot is “Deep Sea Submarine” which is a mini board game that I’d never heard of until I borrowed it from my best friend and haven’t yet got around to giving back! It’s pretty simple but it has an unusual game play in that you all share a common resource (in this case: air) and have to try and maximise your score based on your own and everyone else’s risk taking. The idea is that every player is a deep sea diver who look for treasure from a submarine (obviously!). As you dive deeper you get to higher scoring treasure but the more treasure you hold, the quicker the team’s oxygen runs out and the slower you can come back up to the submarine when you want to return. It has two dice which both only go up to 3 – so every roll gives an outcome of 2-6. You then have to subtract the number of treasure tiles you’ve collected. So every go involves adding up two small numbers and then making a small subtraction. Basic maths but the constant repetition has been great for Piglet’s mental arithmetic. I also love watching how his risk appetite changes from round to round. He dislikes getting stuck in the sea and running out of oxygen (in the game I really can’t emphasise enough) so much that some times he goes back to safety as soon as possible. While other times he just throws caution to the wind! It’s a great travel game because it’s tiny (the box is about the size of a small camera) and you can play it anywhere with a table/carpet/rug.

I’m looking forward to moving through these games and introducing more advanced ones as he gets used to them. It also means we can move back to getting more board games in which is something we haven’t had any excuse for in the last few years!

A couple of other mentions go to other games we’ve been playing: Go Fish (a card game), Bandido (Close the maze), Cranium (kids) and Lego Minatourus (hard to explain!). I’ve got half an eye on getting Ticket to Ride which I’ve played once and really enjoyed and also Settlers of Catan which many, many people have recommended to me. I’d be very interested to know if there are any other games any of you think would be suitable for stretching the concentration of a 4-year-old. Especially one’s where I can still win if I really want to!

Hope you’re all keeping well in the various levels of lockdown creeping back in. Stay safe.
Toodlepips x