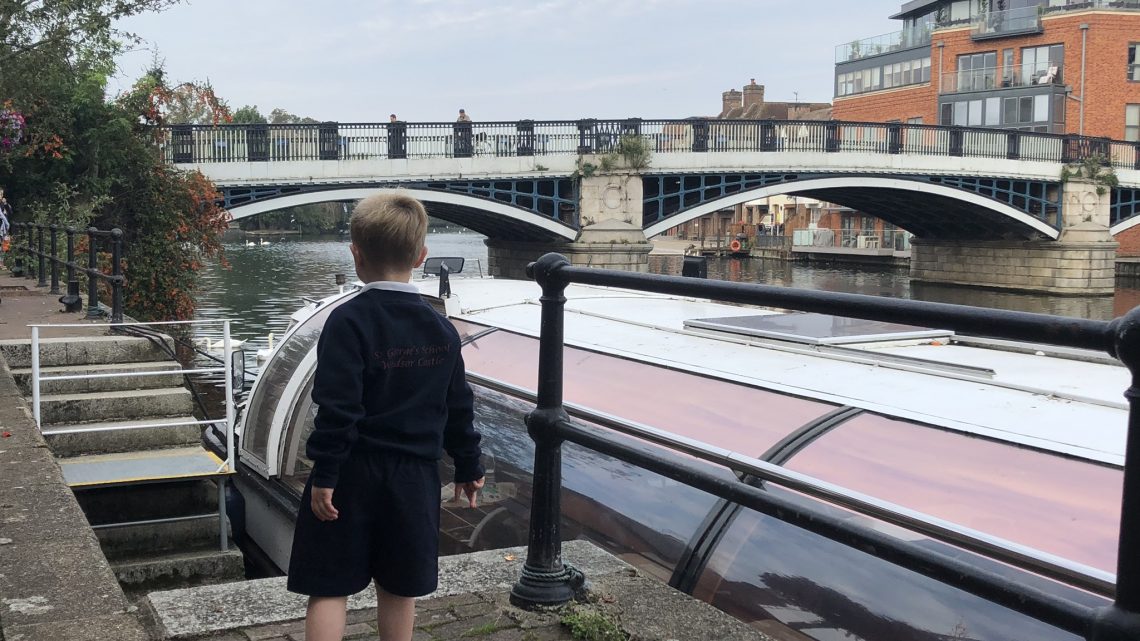 It starts! My little Piglet, the little smiling boy who only a few weeks ago (in my chronologically muddled daddy mind) was a giggling bouncing little baby, has only gone and started school. He turned four earlier this year, it’s now September and so, with all the predictability of a small child forgetting to cover their face when the sneeze at you, it’s time to tackle the next challenge. To be fair, Piglet has been looking forward to it all summer, especially after so much isolation during lockdown. He actually struggled a little bit when he went back to nursery for a few weeks at the end of summer, partially because a lot of his friends hadn’t come back yet or had already left for school but also because we’d be trying to get him ready for school so much that I think he was mentally already there. (We weren’t sure he would actually ever got back to nursery for much of lockdown).

The first day came around so quickly. Before we knew it he was all dressed up in his school uniform with his hair brushed (for once), eager and waiting by the front door. The structured early mornings were a bit of a shock, not least because Piglet and my wife started back at school (different ones, and in different capacities) on pretty much the same day so we had to quickly find a bathroom/breakfast/getting dressed (not necessarily in that order) routine.

To our delight, he bounced into school on that first day with barely a glance back. Armed with a water bottle freshly tagged with his name and an unshakable enthusiasm to say hello to absolutely everyone – adding that he was going to school whenever he got the chance – he lined up to go in without a worry in the world. You’d think he’d been going there for years! He seems to have quickly made friends, even declaring (to us at least) his love for one of his friends already.

I’ve been so impressed already by his enjoyment of learning. He clearly loved his first music lesson, singing “Big Red Combine Harvester” with more rhythm and pitch than I’ve ever managed to install in him in 4+ years, and taking great delight in telling us about the phonics that he seems to have lapped up. I’m sure there have been wobbles and concerns at points over the first few weeks but all the information we get from him is resolutely positive.

There was a little bit of concern during his first weekend. He woke both Friday and Saturday night very upset and with signs of acid reflux. There weren’t really any other signs of an allergic reaction but he was quite emotional all weekend and I did start to wonder whether he might have eaten anything. I very tentatively mentioned it to school the following Monday; not wanting to sound provocative or annoy anyone so early into his first term. We’d talked about allergies when we first looked around the school and had a couple of discussions when we filled in his induction forms but I hadn’t ever had a chance to discuss it with his teacher directly. The school responded very well making sure we knew what processes they had in place and even offering to keep notes on exactly what he ate if we wanted the reassurance. It very quickly became clear that they had it completely in hand and there were no more signs of reactions after that. It just goes to show that it’s very often difficult to identify a reaction and he also (presumably) gets affected my the emotional challenges as well – however well he appears to have coped with starting at school. Luckily that was the only worry we’ve had and he seems to have hugely enjoyed the school lunches so far. I think he might actually get to eat much more ‘normal’ food at school than he gets to eat at home. Tales of fish fingers, jelly and cake make me quite jealous!

I am very jealous of his unwavering openness and friendliness with everyone on the way to and from school. We made a point in the build up to his first day to just delicately plant the idea of making sure to talk to people, introduce himself, ask questions etc… when he started. Partly on the back of his slight introversion when he started back at nursery for those two weeks. He seems to have taken the concept and run with it. To the extent that we already check in everyday with the man who cleans Cote Brasserie every morning and he overflows with delight whenever he sees any of his friends either before or after school. He quite openly shouts the name of any his classmates that he sees until they notice him and I struggle slightly to find a compromise between encouraging him to be his sociable innocent self and saving face in front the other parents (and general public in a fairly busy part of town) at his exuberance. To be fair, the other kids always seem delighted when they see him and shout his name back so he’s amongst friends.

It’s been nice getting to meet some of the other parents and build a sort of a network. Particularly when some of them already have children at the school already. However, I do find it a little uncomfortable, having never been very good at small talk and feeling like I’m already a little bit of an outsider to the clique groups already. I’m sure many of the other parents are in the same situation but I’ve never been great at small-talk, especially when I’m trying to ‘manage’ an over enthusiastic 4-year-old when making introductions. Part of the problem is that the whole system seems utterly alien to me: one of the ‘parent representatives’ came up to me in the first week to ask if I was happy to add my details to a central spreadsheet so that other parents could contact me if needed. I, naturally, obliged; delighted to have the chance to encourage communications between myself and other parents. However nothing seemed to come of it (yet… it’s only been a week or so) and, in fact, I’m not entirely sure I know what a ‘parent representative’ is or does. That said, my wife has been added to what seems to be a ‘mums only’ WhatsApp group so I’m not sure whether it’s my gender or naivety that has held me back. Either way I’m sure I’ll get to know some of the parents over time, especially as specific friendships start to form.

As soon as I begin to think I’ve got any part of this parenting malarky under control – someone goes and puts me on the next, harder, level and I have to start all over again. Next up: working out what on earth to do around Christmas amongst the uncertainty of what level of socialising will be allowed/seems sensible. Maybe wait until half term to cross that bridge…

Sending thoughts of parenting solidarity, if not solitary isolation, to all of you.