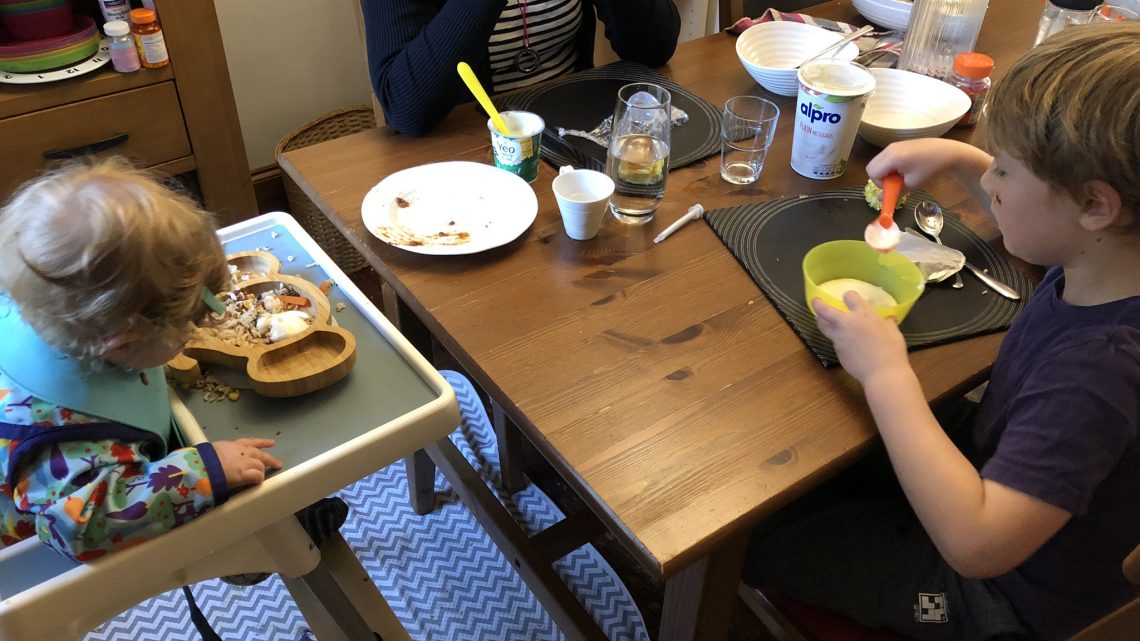 It’s been a fairly momentous month in the Allergen Dad household. Things have moved on a lot since I last posted a blog: Dragon is now 9 months old and, judging by her appetite, enjoying the full capability of those ever-so-sharp two bottom teeth that she’s so proud of. Piglet has just turned 6 and treated us to the world of hosting kids’ birthday parties; something we’ve largely avoided due to COVID. Mrs Allergen Dad has confirmed in writing her desire to leave teaching (for now) and focus on her new plans to become a antenatal teacher. I have come out of the other side of a fairly disruptive mental health wobble (separate blog post to follow) feeling somewhere between human-again and really quite positive. One of the key drivers of this is having finally got around to sorting some of the many issues with our house. Somewhat unsurprisingly, being surrounded by holes in the ceiling, peeling paint and dripping roofs isn’t entirely conducive to positive mental attitudes. I could have hugged David (or MyHandyman as he’s professionally monikered) by the time he’d finished.

Anyway, that isn’t actually the purpose of this blog post. I have something much more important, and relevant, to share:

Having put it off for months, if not years, we finally decided to bite the bullet and test Piglet’s soya allergy again. It’s been quite a long time since we’ve clearly seen an allergic reaction in him from either milk or soya and while I haven’t managed to do this with milk, I know it’s possible it he might grow out of his allergies. We did try him on soya last year but I found the entire exercise very distressing and conflicting and dreaded trying again. One of things I found difficult last time was not knowing how to measure to what extent he was having a reaction and separating the allergen from the other factors in his life. Despite blogging about it for several years now, I still ebb in and out of confidence about how well I understand Piglet’s allergy. Compared to milk, where he used to get fairly clear digestive issues, soya seemed to cause much less clear symptoms. The symptoms we thought we could see would range from problems sleeping, cranky irritable behaviour, excess mucus and others signs that would indicate digestive discomfort and/or histamine reactions. But in truth, as he got older, the symptom we saw most commonly was simply behavioural. This made reintroducing it last time very difficult because a 6-year-old’s behaviour is not predictable in the first place!

We decided that this time we would try a different, riskier, approach. Instead of starting at the bottom of the soya ladder (small amounts of soya lecithin or soybean oil) and increasing the purity of the allergen over time – something that gets really hard to stick to whenever anything comes up that might affect Piglet’s disposition, however much you think it’s unlikely to related to food – we jumped straight to the top of the ladder and hoped for the best.

I should say clearly at this point – Piglet’s allergy is clearly not an acute one. Specifically he has a non-IgE mediated soya allergy which means that he is not immediately at risk of anaphylaxis or other life-threatening symptoms of a severe allergic reaction. There was still a reasonable chance that he would experience very uncomfortable symptoms that could last many days but we did not consider any risk to life. I must strongly suggest that you work with a medical professional when attempting to reintroduce an allergen to someone who has a more severe (or unknown) reaction to an allergen.

The theory (or perhaps justification is a better word) was that we would ‘rip off the band-aid’ this way and get a clear and quick update. If it caused a reaction, we could treat it with painkillers and antihistamine instead of risking a drawn out and protracted experiment where we felt a tension between pushing on to be sure and treating it if there was a risk that we were causing harm.

The plan was to go to Wagamama’s and order as much soya as we could justify and try both Piglet and Dragon on it at the same time (Dragon hadn’t had any yet as we don’t tend to have soya at home and we wanted to be clear of recently introducing other foods before we tried her on it). We were met by a waitress that I remembered from many years ago when Piglet first went there. We used to go quite a lot until we realised we needed to cut out soya completely and Japanese/Asian food being largely incompatible with a soya allergy. If felt very odd mentioning our milk allergies but being very deliberately quiet about soya. My oversharing self was tempted to explain what we were doing but it didn’t feel fair to put them in a position where they had reason to worry about us.

We ordered some katsu curry (soya in the sauce), some ginger chicken noodles (soya in the marinade), some chilli chicken ramen (soya in the soup) and, most importantly, a bowl of edamame (pure soya beans!). Both kids seemed to really enjoy the edamame even if Dragon found they pinged off her fingers and out of her mouth if she squeezed them! I sat fairly distracted from my food watching them as they tried all the new flavours. Dragon was obviously oblivious to what we were doing but Piglet seemed quite excited. We made it clear to him what we were doing and why we were doing it. His face was a picture when we saw the bowl of edamame! Piglet didn’t seem completely convinced about the Katsu curry sauce – he’s not really a sauce person where it’s completely optional but they both had enough edamame to be sure that they’d had a decent portion of soya to judge whether there was a reaction.

The next day I tried very hard not to ask leading questions or worry Piglet (Dragon is too young) by badgering him about how he was feeling. I did ask him to do ‘full system checks’ a few times though where I go through all the parts of his body and ask how they feel, trying to not to emphasis the areas you might expect to find a reaction symptom in (tummy, mouth etc…). 24 hours in: fine. 48 hours in: fine! He did say that he had a slight tummy ache on day 3 but it was before breakfast and before he’d done a morning wee and was gone afterwards. But even if it was a symptom it was very minor – he didn’t show signs of actual pain and it was quite delayed from having such a pure dose of the protein! Dragon didn’t show any symptoms at any point.

We tried again a few weeks later, this time just buying some soya yoghurt and trying over multiple days. To add to the excitement we decided to try Dragon on cows milk at the same time (I know, glutton for punishment, right?). Having always hated yoghurt myself in any form (dairy, non-dairy, anything that doesn’t go straight in the bin) it felt incredibly weird watching both of them devouring bowls of the stuff. Naturally we have no reason to believe that Dragon is allergic to milk. But considering that Piglet and I are, it’s at least a possibility. Also she has shown signs of hayfever and we’re still in the middle of working out whether she might have a sensitivity/allergy to egg (she gets eczema on her hand sometimes and it seems to coincide with eating food with egg in it – check on going…)

This test, while far from categorical, was more problematic. For a start, Dragon seemed to clearly show signs of colic and the kind of nighttime arching of the back and discomfort that we have long associated with Piglet’s milk allergy reaction. It wasn’t anywhere near as strong a reaction as Piglet used to get but we’re pretty sure that it was a reaction. So that’s milk for both kids, at least for now. Further to that, Piglet got tummy ache about 48 hours later and it was causing him quite notable distress on and off for a couple of days. In fact, a week later he is still occasionally referencing a level of discomfort. But – as seems too often the case – the allergy test was blighted by another problem: this time a high fever and 48 hour illness that I can only presume is in no way related to an allergic reaction. He was really quite poorly at the weekend with a high temperature persevering despite Calpol and Nurofen. But it just goes to show that kids are not nicely controlled scientific experiments and it can be very very difficult to isolate food-related impacts from wider environmental influences.

Soya yoghurt is higher on the soya ladder than cooked edamame, something I hadn’t realized before hand. So it is possible that the level of reaction is linked to the intensity of the soya protein. If edamame only caused a small reaction then it’s quite possible that he could have lower intensity foods like soya lecithin (found in a lot of dark chocolate) or maybe even soy sauce; both of which would be very useful. But that means experimenting with even less clear (hopefully) symptoms. We’ll have to try that when we’re confident he’s feeling better and the soya yoghurt is definitely out of his system.

I’ll be honest, it’s a bit frustrating to have seen so few symptoms after sharing a bowl of pure soya beans and yet still find ourselves second guessing how strong the allergy is. But I’m glad we checked even if the outcome ends up being that he still reacts to most levels. What we have learnt (I think) though is that even if he does have a reaction – it’s something he can cope with and, given his age and communication, let us help manage with pain killers/antihistamine etc… I’m less disappointed that Dragon is allergic to milk. It’s a shame for her personally and I do hope that she may grow out of it but with Piglet and I still allergic it’s not something we have in the house and avoiding it is relatively easy. It has been sad watching her squirm at nights for the last week or so though. I’m just glad we didn’t have to go through the same torturous months that we went through with Piglet to understand a) that it’s not normal for a baby to feel like that and b) what was causing it.

I still hold some hope for Piglet and soya but let’s wait and see. In other news, we had our first estate agent come around today to value the house with a couple more scheduled for this week. Unfortunately there are very few houses coming on to the market in the place we want to move to (and generally across the UK from what I’ve heard), so hopefully we can find something once ours is on the market. In completely unrelated news, we also managed to get Dragon out on her first bike ride – on the back of my bike. Her helmet (the smallest one I think you can get) is still a little bit big for her tiny head so I don’t think she got quite the experience that I was hoping for. But she certainly didn’t seem to mind it.