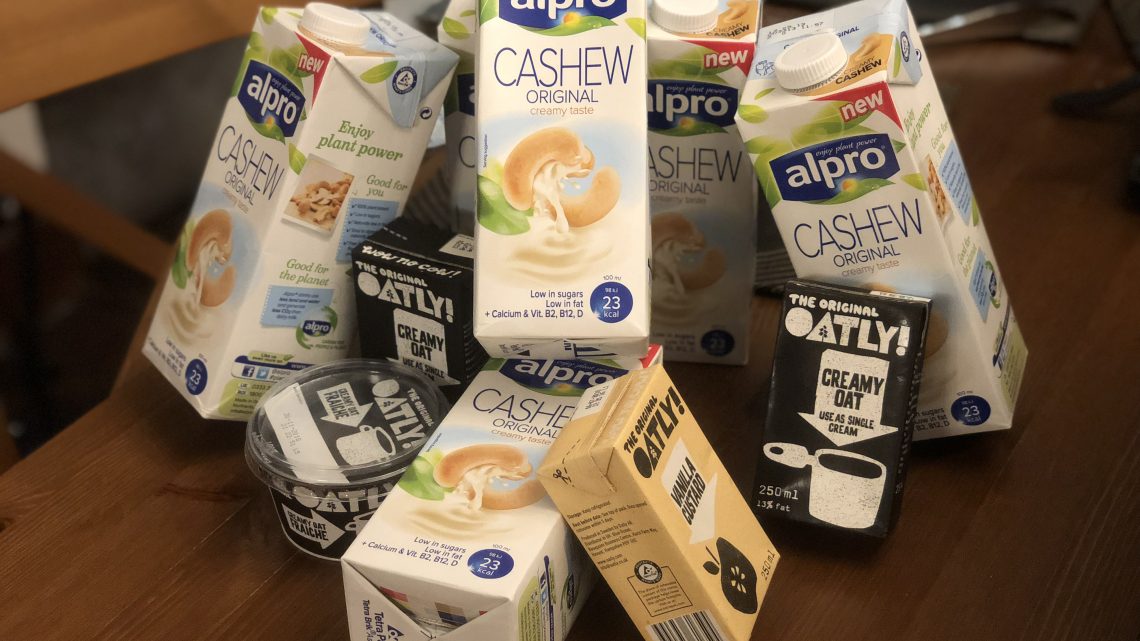 There are a lot of dairy-free alternative milks out there. I can honestly say I’ve tried most of them. To anyone hoping they’re going to taste like cow’s milk, they’re going to be bitterly disappointed. Having experimented with many of them, we’ve settled on Cashew Milk (it fits my tendency to only drink unnecessarily obnoxious posh drinks – which you might have noticed from the other posts). But I thought it might be helpful to share some points on some of the others out there.

Soya Milk
For years this was the cow’s milk alternative. I grew up on it, drinking gallons of the stuff and genuinely enjoying it (even if my school friends did used to deliberately mis-hear what it was and call it ‘soil’ milk). It comes sweetened or unsweetened and is made by a number of brand and own-brand manufacturers. It’s also often the only dairy-free milk that you will be able to order in a cafe, although some places are getting better at expanding the range. Naturally with Piglet’s allergy to soya – this is not something we keep in the house any more but it was the first milk we went to (oh the irony) when we took him off the cow’s stuff. In fact, specifically the ‘growing up’ soya milk that comes with added nutrients for parents intending to wean onto dairy-free milk.

Almond Milk
This, to me is probably one of the most common nut milks out there. You can now get it in Starbucks. It’s fairly mild in flavour and works quite well in steamed and frothed hot drinks. I find the unsweetened stuff just a bit too much like nutty water but I quite like the sweetened stuff. We used to have this a lot until we found…

Cashew Milk
It was a treat the day we found this (perhaps if I’m honest because we moved from unsweetened almond milk to sweetened cashew nut milk, but still…). To me it’s creamier than a lot of the other nut milks and I can happily drink glasses of the stuff or make a macchiato for myself, a latte for my wife and a babyccino for Piglet. (Posh drink complex again). We buy so many of these from our supermarket shop that I feel embarrassed and will even stock up when we internet shop to avoid the next round of embarrassment. It’s maybe not the best milk for heating, it will separate but it stirs back together fairly easily. Maybe doesn’t look the best when you start heating your porridge though!

Hazelnut Milk
Rich, flavourful and dark. Great on first taste but a bit much to have as a full-on milk replacement in my eyes. It’s fairly strong tasting and notably browner in colour than a lot of the other nut milks. I really like the taste of it, but I wouldn’t really want it on my cereal every morning. There is one area where it excels though and that is in hot chocolate. For an intense creamy hot chocolate it has to be the best alternative milk, but opening a carton just to make hot chocolate is quite a luxury.

Rice Milk
This is one of the few milks I haven’t tried. Primarily because it’s not advised for children under five. There’s a few theories for why this is the case. One of the main ones is that it doesn’t have very much protein in it – so it’s not suitable as a milk replacement for babies. But I think the reason rice milk has an age suggestion of 5 rather than some of the other low-protein versions that have lower ages is that there can be trace levels of arsenic in it. I can see why that might not appeal.

Oat Milk
Oat milk is increasingly popular. Particularly on the back of Oatly’s quirky advertising and promotional material. I’ve mentioned this before but Piglet seems to react to oat milk in a way we don’t understand (he’s absolutely fine with oats!). As a result we haven’t had much of the stuff. As a drink, I don’t hugely like it, it can taste a bit powdery, but the “Barista-quality” versions of the stuff is meant to be really good for steaming/frothing for hot drinks. Also, my best friend (a vegan, so milk-free for different reasons) says he wouldn’t make porridge with anything else.

Coconut Milk
(Not the stuff you make Thai Green Curries with!)
This is similar to oat milk in the sense that Piglet seems to react to it despite being absolutely fine with coconuts. I don’t particularly like the flavour of coconut in this context and find it quite strong tasting. Also it’s worth noting that some of the coconut milk you can buy as a dairy-free option in big cafe chains contains soya (it does say this in the small print on the menu but you might not be expecting it). For places that only do soya, oat or coconut milk it means we don’t have an option unfortunately.

Hemp Milk
So this is what Piglet has at nursery and we kind of stumbled on this by process of elimination. Nursery didn’t want us to be bringing a nut-milk in for fear that other children might have nut allergies (we can’t really complain at this!) and soya, rice, oat and coconut were off the table – so there weren’t many other options. Piglet seems to really like it though and it’s very white which can be more visibly appealing than some of the other options which can be a bit yellow (soya) or brown (hazelnut). I’ll be completely honest – I struggle slightly at the idea that it’s made of the same stuff that shipping rope is made from. Also most people make the suggestion that it must ‘really-calm-him-down’, not realising that it comes from a different part of the plant (all-be-it the same plant) as cannabis. I have not once had long philosophical conversations with Piglet about the creation of the universe after a particularly heavy mid-morning snack time. (That said, he does love his snacks!)

Do you think it’s obvious we’re dairy free when we do our weekly shop?

One thing that’s worth pointing out (and we had problems with at first) is that a lot of nutritional advice for dairy-free milks works on the assumption that you’re transitioning away from cow’s milk in the first place, rather than just wanting milk products in their food (think porridge) as part of their weaning on to food in general. Several confused conversations were clarified with the explanation that Piglet was still being breastfed when we had been pushing back on forcing Piglet onto ‘growing up’ soya milk. That said, if protein from milk is important – some are better than others and nutritionally they are going to be different from cows milk whatever you’re doing (imagine trying to churn cream from almond milk – it’s not going to happen!)

Hope this is useful. I’d be interested to know your experiences/preferences in the comments below.