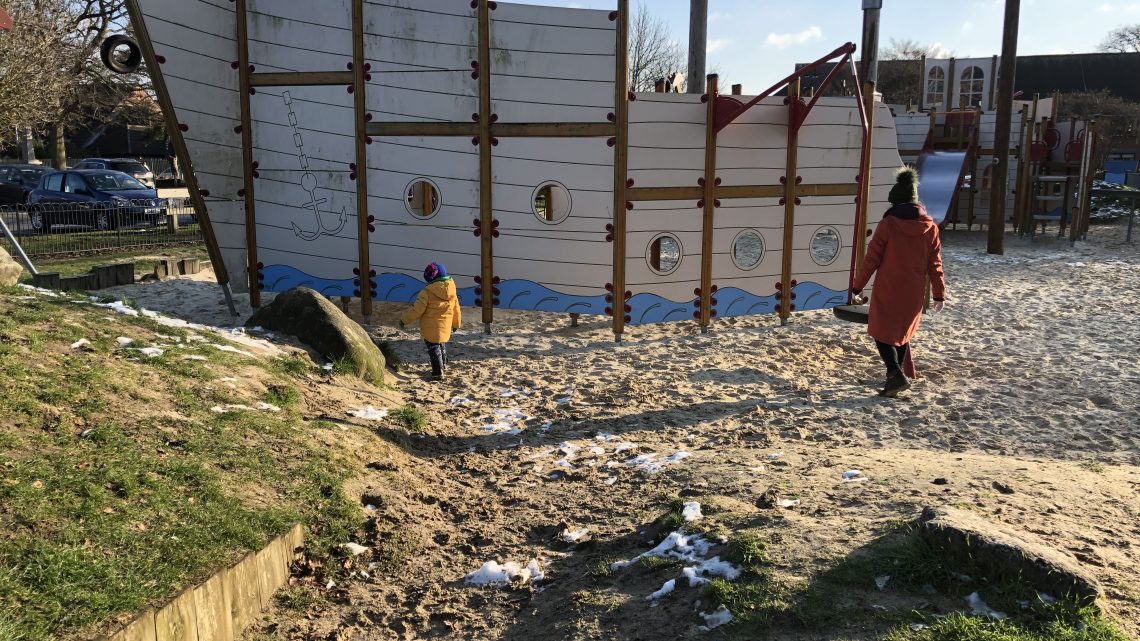 Yo ho ho! Quick person count: 1, 2, 3… All present and correct after the snowy cold weather. Actually, we didn’t get it too badly. A few centimetres of snow when we woke up on Friday morning but nothing worse than that. Even my most pessimistic planning couldn’t fully justify me not going to work.

I have worked out, however, that my iPhone weather app is the doomsayer of prediction makers. It has repeatedly warned of hour upon hour of forthcoming snow only to subtly update its outlook as the time draws nearer to admit that it might have been a bit overly cautious. Could it have a hidden agenda to not want me to go out?

Piglet has generally loved the cold weather and particularly the snow. He spent a good few hours wrapped up to his eyeballs in thermals, base layers, tops, overtops, fleeces, coats, hats, scarves and gloves, making snowmen with mummy while I was getting ready to go to work on Friday. (When I said the weather wasn’t bad enough for me to be off work – I still took the opportunity to work from home for the first few hours on Friday morning!) There are still two slightly sad looking scarfed and hatted foot-high snowmen out in the garden, guarding the back door and the entrance to the shed.

Despite the weather, we’ve actually far exceeded our weekly 3 hours towards our #150hoursoutside this week. I took Piglet to the park on Thursday morning and we played on as much of the apparatus as possible that wouldn’t lead to us trudging home with wet bottoms. That meant that the lethally icy slide was out, as were the swings and the tractor climbing frame. We still had a great time playing hide and seek. Well I thought we did… We took turns to hide (to fully grown adults with semi-decent eye-sight, there isn’t really anywhere to actually “hide” in the park – so we just take turns to stand in slightly obscured parts of the park – or often in Piglet’s case, just cover our eyes). On my turn to hide, I ran as far as the badly counted 1-to-20 gave me and hid, stood upright, behind a panel 1m high by 1m wide topped with a set of bars at best an inch in diameter. For those of you that haven’t met me – that’s not the perfect silhouette for my body shape. After counting to 20 (or at very least saying the number ’20) he wandered straight towards me, looked around very deliberately and then turned on his heels and walked back to where he’d counted. I gave him a good 10 seconds and then moved slightly to make sure I could see that he was staying inside the park, sent a photo of Piglet looking for me to my wife and waited another 10 or so seconds.

Eventually I moved even closer towards him and called out to him to find me. He looked up at my voice but didn’t come closer so I abandoned cover and walked back to him. He was stood holding the gate at the entrance to the park but looked a little glazed and didn’t look directly at me. It occured to me that despite his 20+ layers of clothes he might be a bit cold and so I crouched down to his eye level and asked if he was OK. He BURST into tears and staggered into my arms, crying his little eyes out. He obviously thought he’d lost me in those 30 seconds and started to panic. I’ve never felt so guilty in my life. I hugged him tight for a good 5 minutes and promised that I’d have never left him.

Fast forward to today and playing hide and seek at the Pirate Park in Windsor I was much more careful to make sure he didn’t have to look for us for too long. That said, it still took us 15 minutes to find mummy in clear sight after he’d found me. I have vague memories of my dad being frustrated with me and my lack of ability to find things as a little child. I can’t imagine where Piglet gets it from!

After hiding, climbing, swinging, zip-lining (that’s a lot of fun!) and a short bout of football in the park in the near freezing air temperatures we were ready for a hot drink and a warm coffee shop to thaw us back out. Well, as I mentioned in my last post, I’m not actually drinking coffee at the moment as I’ve decided to cut out caffeine for a while. However, before that I had created a post about Costa Coffee now offering almond milk as part of an expanded list of milk alternatives. There’s a Costa about 200m from the Pirate Park so we thought we’d try there to see if we could Piglet a babyccino at least.

As I walked through the doors, the idea of having an almond milk hot chocolate struck me. After quickly explaining why I was interested they were happy to show me the ingredients on their hot chocolate powder. To my delight, no dairy or soya! It does say ‘may contain milk’ but the steaming wand is regularly used for dairy milk so this isn’t really adding to the cross contamination risks. Two minutes later, I’m sat with two large hot chocolates and a hot chocolate babyccino for Piglet and a bar of dark chocolate that’s also suitable! Happy Days!

*I do realise that by having dark chocolate and hot chocolate instead of coffee I am still getting a caffeine hit. I can cope without even having decaf coffee but I can’t cut out chocolate. Not yet. I’m only human.

The hot chocolate is really good and the almond milk works really well with it. You can really taste the almond and it’s sweet enough but not so sweet that the drink feels sickly. We all huddle around our hot drinks to warm up our extremities and our insides. Well, my wife and I do; Piglet sits there sipping hot chocolate from a large espresso cup one-handed like he’d be more at home smoking a cigarette outside some Parisian cafe attracting the pretty French girls with his elusive air and undertone hints of arrogance while he writes his memoirs at age 22. He, naturally, captures the attention of a new mum on the next table who I hear fawning over him, “aww, look at that little boy drinking his babyccino”.

I’ve said before that I’m slightly worried that Costa’s embracing of almond milk might mean that I spend less time (and, more importantly, money) in independent coffee shops but I have to say I’m really impressed with how easy it makes things that they do. It has undoubtedly given them the edge over any of the other big coffee chains and it’s a relief to know that there would always be a Costa around if we can’t find anywhere else to go. The fact that I can now have hot chocolate in place of my flat whites is great news for my hot drink satisfaction levels, if not my waist line…

It’s meant to hit -5 centigrade tonight. Hopefully I’ve put enough duvets and blankets on Piglet to keep him warm through the night. Although, having cut his nails by mobile phone light under the distraction of sleep, he’ll at least not scratch my eyes out if I do have to go and comfort him in the night.