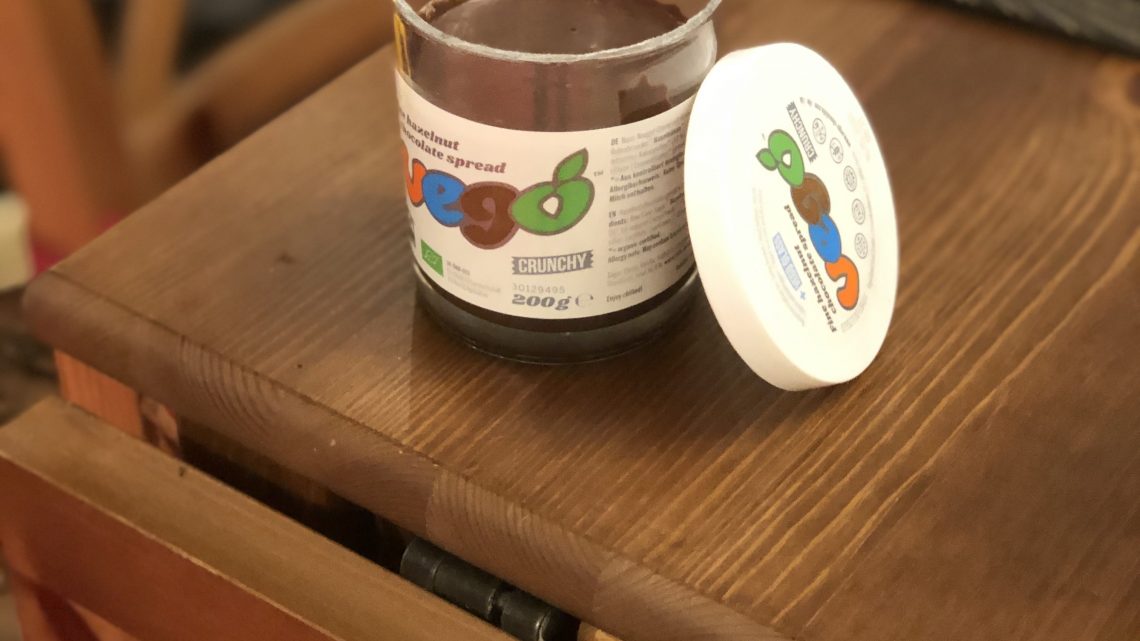 As with so many of my review-based blog posts, I always feel a little insincere reviewing milk alternative products as I don’t eat that many of them. Much like when I was a vegetarian for many years; I wasn’t looking for meat alternative meals, I just ate vegetable based main meals (of which there are many, and delicious they are too). It’s the same with most milk products, the alternatives don’t hugely appeal. I’m certainly not out testing them every week. But I saw something today that I hadn’t seen before and couldn’t resist the chance to try it and write up what I thought.

I’ve tried the Vego chocolate before. They do a ‘milk’ chocolate hazelnut bar which I know a few of my friends really like. I’ve never been that bothered about them. They’re perfectly edible but they have a slightly artificial taste to me. A trend I find common across many ‘milk’ chocolate substitutes.

The spread comes in a satisfying glass jar. Those of you with similar (late) teenage Nutella addictions like mine may remember the glasses you used to be able to buy (maybe still, it’s been a few years for me). They even did an Asterix cartoon promotion for a while. As such, most of my dad’s drinking glasses were Nutella jars for several years when he was first kitting out his canal boat in the years after my parents split. I’ll be honest, just writing this anecdote I’ve realised that I must have eaten Nutella (and therefore milk products) at a younger age than I’d realised!

The crunchy variety of the spread (I can see there is a plain one too but didn’t buy that) comes with small hard and crunchy bits of roasted hazelnut. These are tasty, if surprisingly sharp in the mouth. The spread is sweet and clearly hazelnutty (perhaps more so than Nutella) and it tastes fairly good but unfortunately for me it has the same slightly artificial taste as the chocolate bars. Having read the ingredients, I think it might just be the taste of vanilla. I’ve never been a big fan of vanilla except in very specific cases (ice cream is a good example). My sister used to have these toys (borrowed from the toy library, I suspect) called cupcake dolls where they had a rigid large hat and a structured (petticoated) dress and no legs. As such, when you ‘inverted’ the skirt it snapped up into the inverse shape, nicely lining up with the hat such that they looked like a cupcake. The dolls were heavily scented (I guess to match up with the cupcake theme?) with vanilla. The smell was so strong it used to make my wretch and I’d refuse to touch them given the smell it would leave on my hands. I tried to explain these dolls to someone recently but got to the point where I explained that you lifted their skirt, sniffed them and found the smell overpowering and found that I suddenly had a lot of explaining to do!

Anyway, the point is, I don’t think I like either the type of vanilla scent in the Vego spread or the quantity of vanilla used. It doesn’t make the spread inedible and i’ll probably finish the jar at some point; but it’s not going replace my Nature’s Store version which I’m far far too keen on. There is the small issue that the Nature’s Store version contains palm oil which I know is probably not great. Maybe one day I’ll wean myself of chocolate spread entirely; but for the moment it remains my biggest guilty pleasure. It’s also a key part of my chocolate, ginger, banana porridge that I have most mornings. A breakfast that I suspects strongly offends my Glaswegian mother-in-law who thinks that porridge should be made with salt and little else!