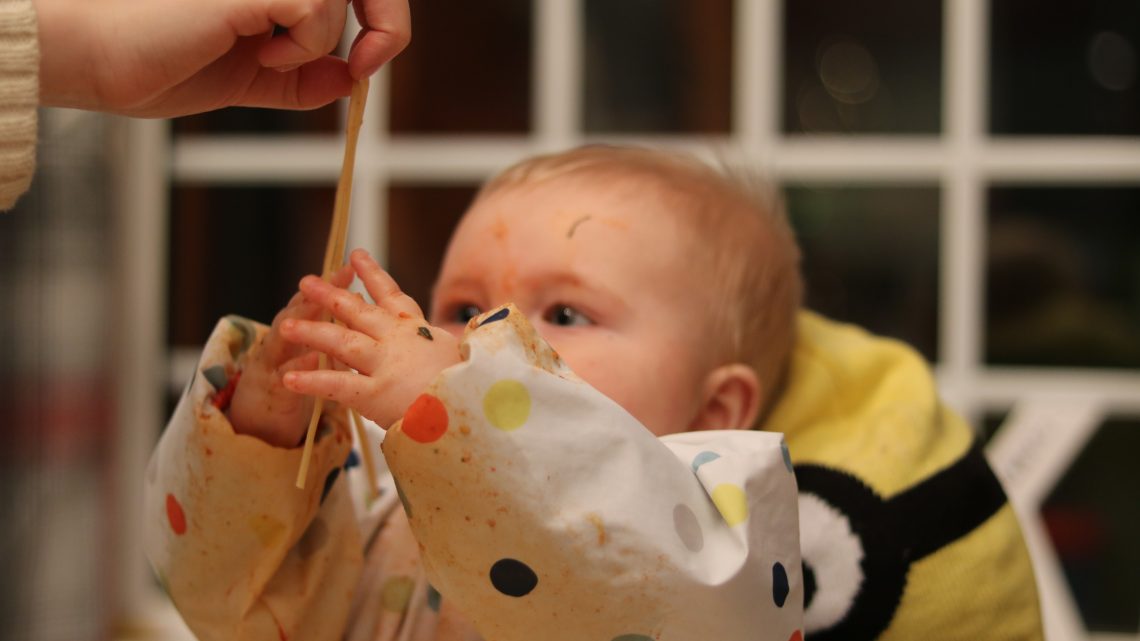 Sweet potato. That was the first thing that Piglet ever ate: a sweet potato wedge.

He was cautious at first (as were we, paranoid that he’d choke on it or inhale it or whatever else a nearly six month-old baby can do with a soft piece of food…) but he developed a taste for, well… tasting very quickly. We were very clear from the outset that we wanted to focus on baby-led weaning. He was breastfeeding well at this point and clearly enthusiastic to try food so we never felt a desire to feed him puree from a spoon. Instead we just gave him whole food that he could eat with his fingers. I do feel a slight pang of missing out, having never had to do the ‘the spoon is an aeroplane’ technique to persuade him to eat; I make up for this by the doing it with toothbrushes though, so everyone’s a winner.

I was probably over enthusiastic in expanding his palette in those early days… Once he’d shown he could handle chewing and swallowing and wasn’t going to go straight into anaphylactic shock at some of the obvious first-try food risks; I would make unnecessarily grown up meals for him to try, such was the extent that we didn’t go down the baby food/puree route. I once made him a tiny beef burger with two circles of bread about the size of a 50p piece and little potato wedges. I also made him beef Rendang in those early days, a rich exotically flavoured Indonesian curry which has very slow cooked tender meat and more spice than I feel comfortable with looking back. He seemed to try anything and although he got on with somethings better than others, he was fairly easy to feed. 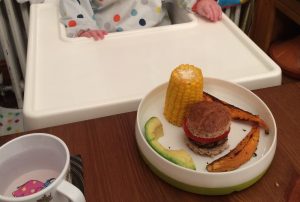 We learnt a few things fairly quickly: Piglet does not particularly like egg. Piglet does like yoghurt (yes, I know what you’re thinking, we’ll come onto that). Heating food only to cool it back down to the temperature it was before you started is a necessarily futile act. Nothing makes you feel quite as guilty as watching your son wolf down a chilli con carne that he clearly loves and then watching him start to cry because it’s more spicy than you’d realised and you haven’t tried it yet! All part of the learning arc that is helping a small person learn how to eat.

One of the things that comes with baby-led weaning is the mess. Feed him off a spoon and you get to decide where the food goes (and more importantly, doesn’t go). Give him the food, let him experiment how best to get it into his mouth and you can end up starting to feel like you’re turning into Mr Sheen in the periods cleaning up after. I’ll tell you what though: IKEA full body bibs… They’re a good idea. None of this ‘here’s a little scoop to catch the occasional food that drips of your chin’. It’s more like the scene from Naked Gun where they go ‘all in’ for ‘protection’ – you’ll know what I mean if you’ve seen it: full length arm covers, torso protection, Velcro backed to secure tightly, elasticated wrists that actually do stop all the food just pouring back inside them. This is what you need and nobody other than IKEA seems to sell them. 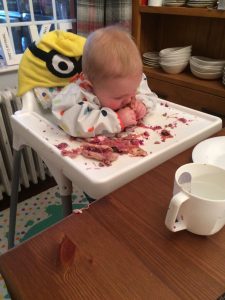 Don’t mind me – just getting this food to my mouth…

Also, the IKEA high chair is a good option. You know it works when many of the cafes and restaurants use them too. Much cheaper than some of the other options as well. It has a full surround tray which means you can genuinely give them food and, until they learn to throw it, expect it to stay on some part of the tray until they’ve at least tried to eat it.

Of course, not everyone is instantly ‘on-board’ with this philosophy and if you don’t realise you’ve invited the Tasmanian Devil round for tea it can be a bit of a surprise. I think both sets of grandparents struggled with this to some extent. Considering they were probably much more used to feeding a clean child in a clean room purée from a well-managed spoon; I can see why watching your grandchild trying to eat yoghurt (yes, yes… Patience…) fairly unsuccessfully with their bare hands might have been a challenge. 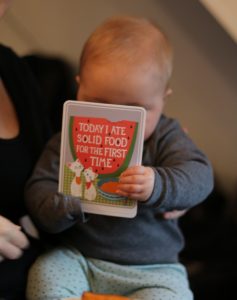 My wife found a wide range of resources to support our cooking for Piglet. Introducing new foods, thinking of interesting ways to present different ingredients, making sure that his diet was balanced all require help and support but are so rewarding when you see him loving his food. Sweet potato and 5-spice muffins were not something I would ever have expected to have eaten previously. The following are some of the valuable resources we’ve used:

Also, having a slow cooker has been really useful too. Meals like peanut butter chicken are fantastic for providing hot food when you want it without having to try and juggle holding a little one and chopping vegetables in order to eat. We’ve found recipes to be a bit trial and error as to how well they work but putting on a meal at 7:30am before I go to work so we can quickly eat together in the evening has been fantastic.

I’m very proud of having gone with the baby led weaning approach. Obviously I’ve got nothing to compare to and I’ll never know what he’d be like now if we’d have fed him from a spoon for the first few months or demanded he finished his portion before getting down etc… It’s one of the beautiful paradoxes of parenting: you spend so much time and energy trying to make the ‘right’ decisions for your little human and yet, once you’ve made them, nobody comes along and tells you whether you got it right or not. Or, perhaps, some people do; but in truth they don’t know any better than you either. But what we have found is that Piglet has a joy for food but also clear autonomy over what and how much he wants to eat. And it varies… Some meals I can’t believe how big his appetite is and others I have to fight the urge to try and get him to eat more. But it always balances out and over the course of 24-36 hours he tends to eat a sensible total amount including a wide variety of nutrients.

Cup of tea… Proof that Piglets parents met in Yorkshire.

I remember being nervous the first time we fed him milk. Distant memories of horrific ear aches as a child for me seemed like a cruel experiment to try on someone so vulnerable and trusting, even if the chances of him having them were slim. I remember his excitement at eating a cube of cheddar cheese; something I’ve never eaten in my life! I waited in fear that he’d have an obvious reaction but it never came – or at least not in way that I was expecting. Piglet had been teething anyway around that time and so he was often upset at the time he was going to bed. Any tears that evening didn’t seem out of the ordinary.

Yoghurt quickly became one of his favourites. He would literally scoop the stuff up with the gap between his thumb and first finger. I still struggle with the smell, having avoided it so fiercely for so much of my childhood, so I was more than happy to leave the serving and subsequent cleaning to my wife. I’ll deal with most messes but I’ll opt out of the yoghurty ones if I can. As it turned out – eating yoghurt in the way that he did (with his hands) gave us the next clue that something was wrong. But perhaps that’s something for the next instalment…